I’ve never ever got into Queens of the Stone Age, but as the final main stage act, I felt a little compelled to go. Their sound was flawless and cool. I was able to recognize a few tunes that were popular enough to reach my Much Music-loving years in the early 00s.

As a non-smoker, the idea of smoking is not something I find attractive in the slightest, however for some reason Queens of the Stone Age frontman made it look good. He managed to sing a tune, smoke a cigarette, and play guitar.

Here’s something he did last night, alone. I wouldn’t mind a solo project from Homme.

Probably very planned, but his wife and the frontwoman of the Distillers had an earlier spot performer under her own name, Brody Dalle.

And of course there’s a tumblr titled ‘JoshHommehavingafag,’ here’s a shot from it: 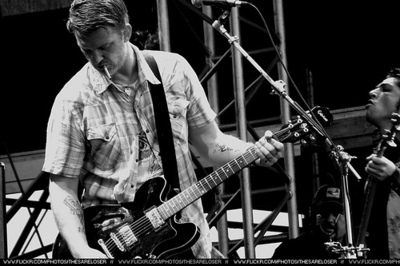