I feel a swell of sadness when I listen to Frightened Rabbit. Frontperson Scott Hutchison took his own life in 2018. First he went missing and the music community wrote about him, begging for him to return home and then soon after his body was found.

Not sure if it’s good writing to acknowledge death when gushing about a band’s music on here, but it’s what comes to mind. It’s still fresh and on my mind as I listen and take in the band.

What I also feel is gratitude for being able to see them play the Danforth Music Hall in 2017 Their last Toronto gig was February 2018, just three months before Hutchison’s death. I didn’t attend, but sure wish I did. The band’s put together a show in December 2018 with special guests filling in on vocals.

Anyways, if you need me I’m deep diving into Frightened Rabbit’s catalogue. It’s been a while and it feels good!

I highly recommend the album Painting of Panic Attack which was produced by Aaron Dessner from the National.

This cover is a great interpretation of Elliott Smith’s perfect song. The laziness and drawl of Mangan’s vocals and the layered vocals for emphasis gives it a lush and full sound that’s far prettier and more accessible than Elliott Smith’s vocals.

I swear when I wrote the last post, I had no idea that this tune would be a single or have a video launch less than 24 hours later.

The strangeness of this video draws you in and… well, I’ll just let you watch it for yourself.

Also, this video is probably the first time you’ve met 72-year-old Lili Hayes, who truly does her own thing. I highly recommend burning an hour of your day on her Instagram. Her son Kevin is full of chuckles and has no shame when bothering and video recording his mom. My own relationship with my grandpa was built on that playful, and slightly annoying reality TV-like surveillance and entertainment factor.

Hayes is no stranger to the music scene, living in LA, Fiona Apple and other notable famous people pop up on her page.

THE END IS NEAR!

Full satisfaction is finding a stranger who confirmed your feelings.

The lushness and dazzling horns made me think of long-time Bright Eyes contributor Mike Mogis. Turns out he mixed the album.

My love of celebrity buzz and seemingly good people connecting is summarized in this article here, but that’s not what this blog is about…

I’ve fell hard for Bridgers’ new album Punisher. I thought maybe it was the COVID mood, but I revisited her first album Stranger in the Alps and still after my new found love of it’s younger sibling, I just don’t like it as much. All this to confirm that Punisher is incredible.

Special acknowledgement to the outro of “I Know the End” and @crescendollsx who is feeling me.

Pretty album art. Can’t wait to get this on vinyl. September 4 seems so far away!

I first learned about Hannah Georgas from Rich Terfry and his CBC 99.1FM radio show Drive. I then saw her tour with Kathleen Edwards in support of the perfect album Voyageur. Then, many years later, with the National in Hamilton, with their female-infused album, I Am Easy to Find.

After some internet searching, I found out that Georgas has been working with the National’s Aaron Dessner on her new music. Here are two gorgeous tunes that I listen to at least twice daily, soak it up!

Sadly Darondo died in 2013 (wow – seven years ago TOMORROW), but his music lives on in TV shows – the song “Didn’t I” was used in both Breaking Bad and Love Life.

Thanks to Toronto’s Hayden Desser (aka Hayden), the National play Toronto more than they probably would without knowing him. Desser hosts Dream Serenade as a fundraiser for children with exceptionalities and their caregivers.

Today I’m gushing over the almost one year old cover of Big Thief’s flawless tune “Not”. That Berninger ambitiously took on less than a month after it’s release on October 11, 2019. For nerds like me who’d want to know, he performed it on November 2 with the lyrics held close to him throughout his performance.

Throughout he struggled with the lyrics, but most noticeably at the beginning (although Berninger’s been known to screw up beginnings, even of his own songs) and a huge sigh of relief when he hits 3min27sec, when he no longer has to sign. He threw the lyrics into the audience as finishing gesture.

The only other member of the National on the stage is trumpet player Kyle Reznick, who adds some colour to the end of the song, giving it the grit that a cover of it needs.

Harlem River was released in 2013, a little while ago. I was still living in Guelph. I don’t think I knew who Morby was at the time, at least his music. I think I had seen him live with the Babies and possibly Woods.

Morby and girlfriend/musician Katie Crutchfield (aka Waxahatchee) did a series of Thursday hangouts via Instagram where they serenaded fans with requests, indulgent covers and fun chat. They sweetly referred to them as “rodeos”. Solidifying themselves as the coolest people that I’d hang out with any day.

Here’s what I’ve been listening to today. The album is good, but the song “Slow Train” is just epic and it has surprise guest vocals from Cait Le Bon. For this moment, physical distancing and pandemics aren’t so bad. 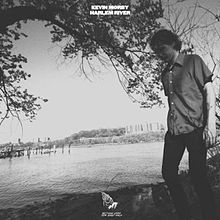